As detailed in a blog post I wrote back in 2016, I first got into using Emacs in the mid 1990s, starting with it on OS/2 and then moving over to GNU/Linux. It’s been my often-used and much-loved development environment for most of those years (I even have a couple of packages that are part of Emacs itself).

For most of that time my configuration was a single ~/.emacs file, which was around 1,000 lines in length (including comments and whitespace). It’d grown over the years, having special configuration sections for versions of Emacs I didn’t use any more, and operating systems I didn’t work on any more (yes, really, there were things in there specific to MS-DOS, for example). On top of that I always hand-installed packages I used – Emacs’ package management system having turned up long after I first got into using Emacs.

Then, in early 2016, I decided to nuke the whole thing and start from scratch. As mentioned above, the start of this is detailed in an older post. Another big round of changes happened round a year later – which included the birth of delpa to manage my personal packages. A couple or so months later there was one last big round of changes, mostly killing off my enthusiastic embracing of customize and instead going back to hand-set settings, only this time done via use-package.

The full history of this can be found over on GitHub, starting with the first “throw everything away and start again” process and all the steps between then and where my Emacs configuration is now.

Which brings me to the fun part of this blog post. Earlier this week I stumbled on Gource. It’s a tool that’s primarily designed to visualise changes in repositories, although it can be used to visualise anything that has a tree structure and changes over time (this week I produced a video of the growth of my employer’s electronic lab notebook by hooking up the Benchling API with Gource, for example). So I got curious. What did it look like as I reworked and tweaked and changed and tinkered with my Emacs configuration? 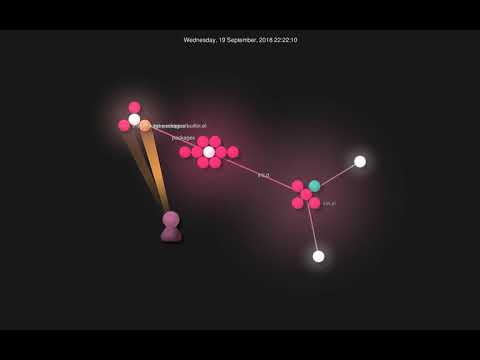 « Getting started EmacsConf 2019 videos are out »