I’ve never been a member of a political party. Ever. The main reason is I’m not that much of a “joiner” and I tend to dislike making compromises on subjects that actually matter. I have been a member of political causes in the past but even those I’ve had to leave because of the struggle I felt when it came to being associated with actions I disagreed with (yes, I am looking at you National Secular Society). While there are plenty of causes that I support, either in spirit or in actual donations, I almost never actually join up.

I’ve also been a fairly flexible supporter of candidates in general elections. While my politics are very much what you’d call “left” my voting patterns tend to be related to how suitable I find a candidate from the parties that I find I have a lot of overlap with in terms of stated aims. Unsurprisingly, for all of my voting life, this has been a case of selecting from Labour or LibDem candidates (with the odd look at the Green candidate). When doing so one of the major factors in making the choice has been tactical voting given that, for most of my life, I’ve lived in (what normally appeared to be) Tory safe seats.

But, for many reasons, I’ve always felt an important connection to Labour.

Possibly one of the best moments, in political terms, was that night in 1997, as I drove back home, down the M3 from London, listening to the radio, hearing Tory after Tory fall and realising that, for the first time in my (politically concious) life, I was going to enjoy the benefits, we were all going to enjoy the benefits, of a Labour government. This was such a sweet victory after having really felt the defeat of 1992.

The Blair horror show that followed was…. horrific. I don’t think I’ve ever felt as let down by an organisation as I did by that Labour government.

Fast forward to this year and I was really hopeful that, perhaps, Labour would be back in government, and this time, lessons would have been learnt. I wasn’t as enthusiastic as before but I was cautiously optimistic.

After this happened, and looking around me and seeing where we were now and where we were heading, I found myself thinking that, perhaps, this time, it was time to break my “no joining” rule. I started to seriously consider joining Labour, lending some sort of support, somehow being involved and taking part.

That’s when I first noticed the whole business of being able to take part in the Labour leadership election by being a supporter. This seemed like the perfect way to dip my toe in, see how I felt about being associated in some way, get a feel for how things worked and, perhaps, depending on how it all went, actually join.

So I paid my £3.00 and looked forward to the process that was to follow. 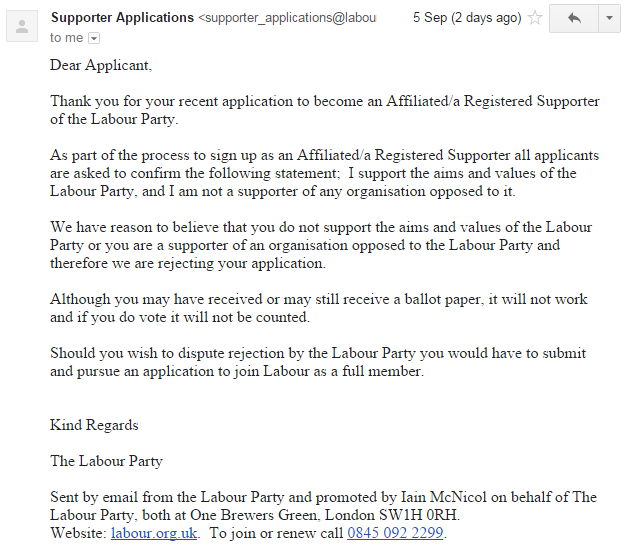 In other words…. I got purged.

And a couple of events before this have me wondering and a little suspicious of how this went down.

I’ll make clear here though: my application to be a supporter was 100% genuine. As I say above, this was a first step on a road that I felt might actually end up with me joining a party – something I’ve never done before. It wasn’t something I did lightly. It was something I did after conversations with a couple of other people where the conversations were about genuine concern with how our country is shaping up right now.

Even as late as a week before I got the above email I was having a conversation with my nephew who, I’m deeply proud to say, is a very politically-aware teenager (far more than I was at his age) and is actually a member of the Labour Party. The conversation was about how I was starting to trust the party again and how I was even considering joining depending on how events went.

My application wasn’t some joke thing, wasn’t done on a whim, wasn’t done to try and skew any result. It was done because it was something I cared about and wanted to explore further.

Anyway, come late on last week I’d had no sort of ballot email and, prompted by a couple of emails from a couple of the leadership campaign groups, I filled in the form to ask them to hurry it up. I think it was late on Thursday evening (2015-09-03) or early Friday morning (2015-09-04).

A little later on Friday this happened (Anroid twitter):

I didn’t think too much of the follow; it seemed like an unusual coincidence that I’d chase up my ballot email and then someone apparently involved in the party would follow me, but coincidences happen.

Then, the following day, I get the letter telling me to sod off. Suddenly the coincidence seems less of a coincidence. I go and check the profile and notice that they’ve even unfollowed me, just a couple of days after the follow.

Note the lack of “follows @davepdotorg” in the profile?

Right now I’m not drawing any firm conclusions about what happened, and I have asked them what the follow and unfollow was all about. It would be unfair of me to decide the events were connected without asking first.

All of this though has made something clear to me. Labour have decided that they never want my support, ever again. I have it in writing. Well, sort of.

What I actually have in writing is an email that says “we’re taking and keeping your £3.00 and we’re calling you a liar while we do this. If you want to prove that you’re not a liar you need to actually join us, actually send us even more money. Oh, and by the way, we’re not going to tell you what evidence we have that you’re a liar, so ner.”

Thank you Labour. At least I know where I stand now. You can safely assume that you’ll never have my support ever again.