I actually can’t remember when the change was now, it was either Android 5.0 or one of the 5.x point releases, but I can recall the frustration of Google having changed how you make an Android device silent, or not. The idea seemed clever enough but it was a real pain to switch to and use. Previously there’d simply been this neat system of setting he volume to either be some non-off value, vibrate or totally silent. I even had a neat little widget on the home screen of my phone to allow me to toggle between these 3 states.

It was simple, and worked well.

The new system though…. ugh. It was confusing and so much more long-winded to work with.

At some point though they added one big redeeming feature: “Until next alarm”. When I got into bed I could tell my tablet to go totally silent until my alarm went off in the morning, and then it would all work as normal. That was an utterly brilliant idea.

So it made sense that if they changed anything about this in Marshmallow they’d keep that in and make it even more awesome, right? Right?!? 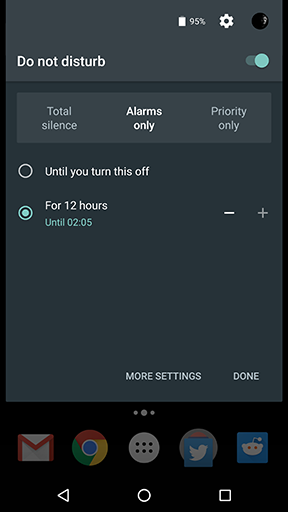 But taking “Until next alarm” away? That’s just nuts.

Sometimes I really get the impression that the Android developers are like the Chrome OS developers: they’re having a ton of fun improving and onward developing the system but they have little connection to how people actually use this stuff.

« Voice search failing on Nexus 6 A little bit of usenet »