I’ve had my iMac for about 10 months now and I can safely say that it’s a purchase I don’t regret. While I’m still not convinced by the hype and nonsense that’s normally associated with Apple products – I’ve had plenty of moments where the damn thing really hasn’t “just worked” – I really do like the iMac as a Unix workstation.

Recently I’ve had the need to consider buying a small laptop that I can use on train journeys. While I have a very capable Windows laptop it’s a little too large to pull out and use on the tray you get on the back of a train seat. I also have a much-loved Chromebook but it would generally fail me on the train unless I always pay for the WiFi. So the ideal machine for me would be fairly small (no more than 12” or so), be capable of doing things locally, and would also need a pretty good battery life (while the trains I travel on do provide sockets they seem to provide no power as often as they do).

I did start to think about going with some sort of Macbook but, every time I looked at them, I ended up deciding they were too expensive.

Until yesterday. Yesterday I found that the local computer store had the 13” Macbook Air on sale – £150 off the usual price plus another £50 off if I got there and bought it before 5pm.

So I had to go and look.

Having looked I came away with one. 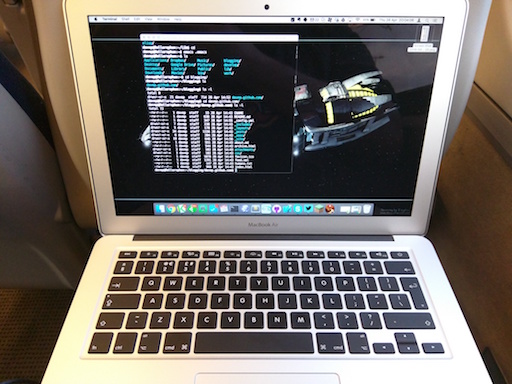 So far I’m very pleased with it. While the one I have is the lower spec version (just 128GB of SSD and 4GB of memory) it seems to work well for my needs.

As for what my needs are? I want to be able to work on web projects locally, hack on JavaScript and HTML, that sort of thing. As well as that I want to be able to run Git and, when I do have a net connection, sync to GitHub and browse the web, do email, faff around on reddit, etc.

For this it’s perfect. I’m finding it more than fast enough for what I want (I’d even go so far as to say that it’s faster than the iMac). The keyboard is just the right size, the trackpad is perfect (and works just like the Magic Trackpad I use on my iMac), the screen is very readable. So far I’m struggling to find any real fault with it.

Okay, sure, there are some obvious downsides, the main one being that, for what I paid for this, I could probably have got a lower-end gaming Windows laptop with plenty of drive space, memory and a good graphics card. But that’s not what I was after. A machine that big and that powerful would sit in the laptop bag and not get used. I wanted a machine that was easy to drag out, open up and use.

And that’s what’s happening with the Air. In fact, it’s being used on the train right now; that’s where I’m waffling on about this, to kill time, somewhere north of Newcastle, with the sea to my right and the snow coming down.

« Until next alarm is back Starting fresh with GNU emacs »