It’s now a week since I last wrote an update and, given that I’m sat on a Virgin East Coast train right now, I thought I’d do another.

As mentioned last time, I’m currently waiting for a call from someone at Virgin East Coast regarding the ongoing situation with the Android Ticket Wallet application. It’s now over 3 months since I first ran into the problem (and, of course, ran into all the issues of trying to get some sensible help and response from them) and nothing has really improved: 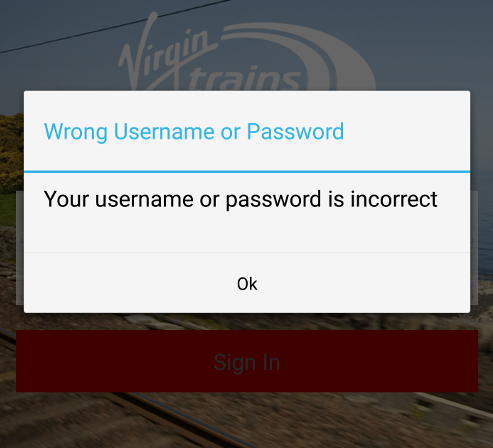 It’s now around six weeks since I was promised a call from someone who works on the application; a call that did come the once but I couldn’t answer at the time (I’m not the sort of person to fiddle with a phone while driving) and which I attempted to return for the better part of 2 weeks afterwards but never even got an answer to the calls.

It’s now also 3 weeks since I was told that I’d get a call from the boss of the person who was originally supposed to call me. I’ve yet to receive a call from them too. I’ve mentioned this to Mike Ross on a couple of occasions now and haven’t had any sort of direct reply as to what’s going on with that situation.

While I am enjoying the benefits of the tickets I was provided as compensation from the earlier troubles (and also very much appreciating Mike’s reserving of seats for me when I need them – I do find that booked seats take a lot of stress out of traveling) I’d really love to get to the bottom of the problem with the Ticket Wallet app.

Frustratingly and amusingly I suspect I’ll finally get an answer around the time I don’t need to use the train quite so much.