For the past two years I’ve, mostly, being happily using a Google Nexus 6 as my phone. In the past six months or so I’ve started to notice that it hasn’t been quite as good as it was. The main problem, for me, was that the camera was starting to play out. The issues were the ones that I’ve seen reported elsewhere: use of the camera would quickly make the phone laggy, very slow response times on pressing the shutter, occasional failure to save an image, etc. This was generally frustrating and, even more so, because I’d got back into photoblogging.

Meanwhile… I’ve been lusting over the Google Pixel ever since it was originally shown off. I was some way off my phone contract renewal and the price of a new Pixel was something I just couldn’t justify. Last week though an offer cropped up that meant I could renew early and get a Pixel (including a free Daydream headset thrown in). 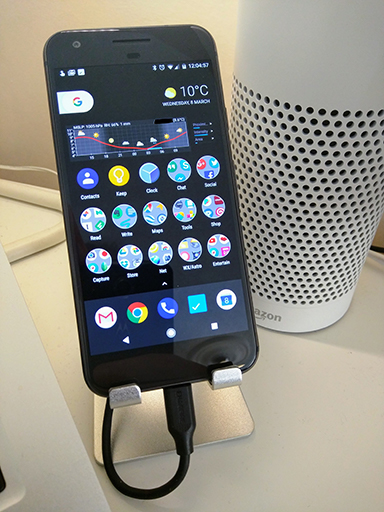 So far I’m liking it rather a lot. It is odd that it’s smaller in my hand than the Nexus 6 was (the XL wasn’t an available option and I was also starting to think it was time to drop down in size a little again) but I’m also finding it a little easier to work with; it’s also nice that it fits in trouser pockets as well as jacket pockets.

It feels very fast (although every Android phone and tablet I’ve ever had have felt fast to start with) and smooth to use. I especially like the default feedback vibration – it’s a lot smoother yet also more reassuring than any I’ve felt before.

The Google Assistant is proving to be very handy. I’m sort of used to it anyway thanks to having owned an Android Wear watch for a couple of years but having it on the phone like this seems like a natural next step.

Another thing I’m getting very used to very quickly, and really liking a lot, is fingerprint recognition. I didn’t think I needed it but now I’m wondering how I ever managed without it. Combined with the notification pull-down gesture that the recognition area supports it seems like a perfect way to open the get going with a phone.

There’s a couple of niggles with it, of course. The main one for me is the lack of wireless charging. That was something I really liked about the Nexus 6: I could be sat at my desk and have the phone sat on top of a charging pad, staying topped up. No such handy setup with the Pixel. The other thing is the lack of water resistance. To be fair: it’s not something I’ve ever really felt I needed with other phones and I’m not in the habit of sticking them under water; but knowing that it doesn’t matter too much if it gets exposed to rain would be nice.

Other than that… there’s not much else to say right now. It works and works well, the move from the N6 to it was pretty smooth and the Pixel has fallen perfectly into my normal routine.