I woke up this morning to see this being retweeted by a few people I follow: 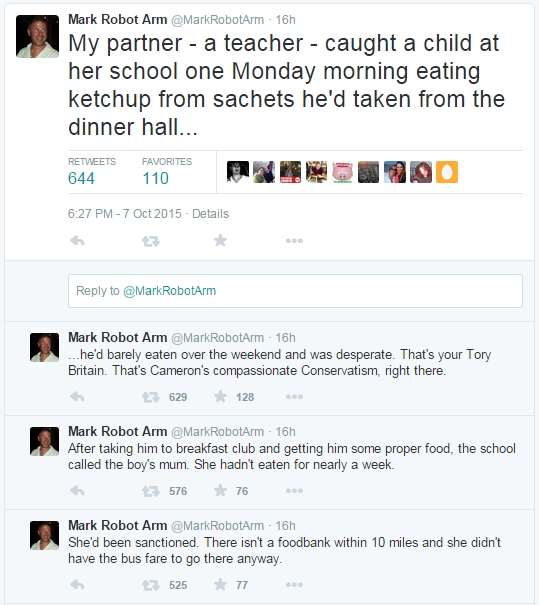 Even if I was to let my usual net-cynic side take over and decide there’s a good chance it’s a made-up story there’s no getting away from the fact that this is a story that isn’t in isolation. I hear this sort of thing time and again; especially from people who have to deal with the fallout from this first hand.

This is something that is happening, in 2015, in the country I live in.

I wish it wasn’t.

This is why I find Labour’s accusation of lying so damn annoying and frustrating. For a short while I simply decided that that was that. They’re as corrupt as the rest of them and only in it for the money. This was made even more clear by how often they kept trumpeting the new member numbers. It’s all about the numbers – all about the money.

But then I saw this video:

and got to thinking that perhaps, just perhaps, some change for the better is actually happening inside Labour. Perhaps I should give the organisation the benefit of the doubt. Perhaps, if I contacted the membership team and asked why they’d decided I was lying, they’d give me the information and I could sort things out.

On September 5th 2015 I received an email from you accusing me of having lied when I sought to become a supporter, with a view to applying to be a member after seeing the results of the leadership election. This was a rather hurtful event and one I wrote about here: http://blog.davep.org/2015/09/07/labour-said-no-thanks-to-my-support.html

Having watched https://www.youtube.com/watch?v=RYNPzJgV8TI I find myself in the odd position of liking the message of a party that, at the same time, accused me of something without evidence.

Given this I’d like to get to the bottom of what happened, hopefully find out what evidence was used to make the accusation and, perhaps, get an apology so that I can seriously consider joining and supporting what is happening.

I look forward to your reply.

I, of course, gave all my full details – the email address I’d used, my home address, my full name, etc. All the information that I’d given when I signed up as a supporter. From what I could tell they had everything they needed to be able to check and give an adequate reply.

So that seems pretty clear: a non-answer to my question and they’re asking for another £10 on top of the £3 they already have off me to find out what evidence they have that meant it was okay for them to take my £3 and then accuse me of lying.

What’s the betting that I’ll spend that £10 and get a non-answer?

What’s even more infuriating is that I’m not actually asking for information they have on file about me, I’m asking for clarification for something they’ve already told me.

It’s really hard not to view this as a simple bait and switch.

So now I’m left wondering what to do next; trying to decide if I just give it up as a bad job and accept that, really, nothing has changed and they’re as bad as ever. Corbyn might well be talking a good game but, under that cover, it’s still just another money-grabbing organisation that wants power and very little change.